Thanks to the Bright Fire & EMS for the rescue demonstration at the June BABA meeting! 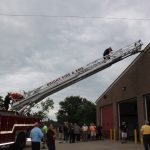 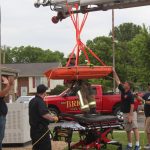 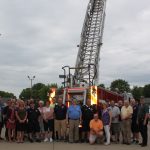 The evening meeting was held at the Bright Firehouse on Salt Fork Rd on June 15.  The meeting was called to order by President Bebe Kinnett. Reports were as follows:

Jim Kinnett reported that the golf outing was a success with 87 golfers. The net proceeds were $9,128. Members reported that at least 2 other golf outings were down 20% in participation this year. Although participation was slightly lower, expenses were cut by approximately $5000 which made the net proceeds close to last year.  Next year the event will be much easier since Jim has posted a guide to follow for the next event in 2018.  A round of applause was given to Jim for stepping up to the plate and organizing the successful golf outing.

Dan Hawkins reported that the new bylaws have been posted for a while on the website for everyone to read.  Dan made a motion to accept the bylaws as written, 2nd by Bebe Kinnett.  Motion passed.

Diane Bender is asking for baskets for the BABA Basket Booth at the Bright Festival.  She needs baskets and volunteers for that weekend.  She reminded everyone that a basket is the perfect way to show case your business.

Debby Stutz handed out BABA-Q sponsorship packages to those in attendance.  The bands that will play at the event are Southbound Sound, My Brother’s Keeper, and Michael T & Friends.  Freddie Burger & Custard will sponsor a fund-raising event the 3rd Thursday in June, July, and August.  Volunteers are needed.

Terri Waltz inquired as to how the golf outing proceeds get distributed and to which organizations.  The process was explained by Jim Kinnett for everyone’s benefit.

Introductions were given round robin by the following in attendance.

Debby Stutz, At The Barn Winery

Thank you to the Bright Fire Department for the demonstrations using the new aerial ladder truck.  Thank you also to Mike & Diane Bender for the lovely supper.

Sign up for the Bright Area Business Association Newsletter

The Bright Area Business Association provides networking for businesses in or near the Southeastern Indiana communities of Bright, Hidden Valley and Logan, and Harris on, Ohio. Call Bebe Kinnett for more information: 812-637-3074.